skip to main | skip to sidebar

There are two things you should know about how Ghanaians celebrate the turn of a New Year.

First is that New Year's Eve in Ghana is primarily a time for church-going, not for partying.  They call Dec. 31 "Watch Night," and starting around 8pm, all the churches are packed.  The worship service goes on for hours, and the singing, praying and dancing become more and more impassioned as midnight nears.  Around 11:45pm, all the lights in the sanctuary are turned off.  A very intense prayer session follows in the dark.  At the strike of midnight, the lights are thrown back on and the praise music roars to a crescendo.  After a few minute of fervent thanksgiving and jubilation, the churches empty out and everyone makes their way home.  Watch Night is also commonly known as "Crossover," and everyone who attends the service is deemed to have cleansed their souls as they crossed over into the New Year.

Second, at least in Winneba, is that New Year's is a time for masquerading.  On January 1 (or the following day, if Jan. 1 falls on a Sunday, as it did this year), Winneba hosts a massive Fancy Dress Festival (or Kakamatobi, in the local tongue) in which hundreds of townspeople get decked out in elaborate costumes and stage uproarious performances before thousands of onlookers in one of Winneba's main squares. A group of 24 UVa students & faculty on a McIntire School of Commerce study tour of Ghana were able to spend the day in Winneba and experience this year's Fancy Dress Festival. Despite the heat, a good time was had by all. Stilt-walkers, brass bands, drummers, jesters, acrobats and more...the carnival goes on for hours, with four teams of masqueraders vying for top honors.  It's a long-running tradition with some pretty interesting roots.

It's impossible to talk about New Year's in Ghana without mentioning the weather.  On top of the typical high temperatures that one encounters in Ghana (80s and 90s every day), January in Ghana is dry season.  In my two weeks in Ghana, I did not see one drop of rain.  I did experience the dreaded Harmattan though.  Harmattan is a sandstorm that originates in the Sahara Dessert and sweeps down to the Gulf of Guinea and leaves everything in its wake covered in a thin sheath of dust.  The air is thick and hazy and everything feels desiccated.

Weather conditions aside, it was a delightful journey and a wonderful way to usher in the New Year! 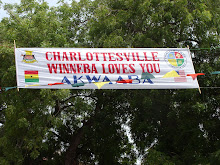 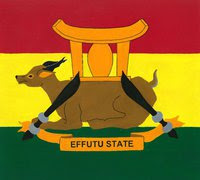 How to Make A Charitable Donation